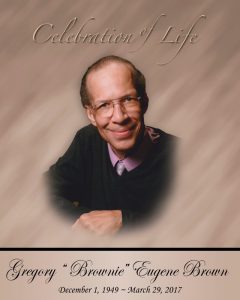 Gregory Eugene Brown passed away peacefully early Wednesday morning at Community Hospital, Anderson, IN, with his daughter, Michelle Cripe at his side.

Gregory was born at St. John’s Hickory Memorial Hospital in Anderson, IN. He attended Anderson Community Schools and graduated from Anderson Senior High School in 1968. After graduation, he joined the United States Air Force and, upon returning from service, he was employed by the City of Anderson.

Gregory was later employed by Guide Corporation, a division of General Motors, until his retirement. He was an active member of UAW 663, where he held the position of Trustee for several years.

Gregory was a proud volunteer with Emergency Management until his health prevented him from continued participation.

Old westerns, music, crossword puzzles, and basketball were some of his favorite pastimes. He was an avid bowler and participated in many leagues. Gregory enjoyed family gatherings where he always presented his “signature hams”.

Greg was a member of New Hope United Methodist Church and served as president of the Senior Choir. His first and foremost love was as a member of The Men’s Chorus under the directorship of William “Teddy” Patterson.

He was a friend to many and dearly loved by all who came to know him.