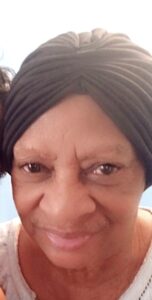 Ethel Marie Butler 78. born in Marion. Ohio and lived most of her life in Columbus,
Ohio, passed away from bravely battling Alzheimer/Dementia on May 1st, 2022. Passing
in New Castle, Indiana lovingly surrounded by her five daughters.

Ethel or Midge as she was affectionately known by, was born on October 18, 1943, to her
parents Robert and Margret Butler both deceased in Marion, OH. Midge moved from
Marion, OH to Columbus, OH right out of high school where she met Isreal Lonzo
Ingram as they went on to have her first-born daughter Kim Rachel Ingram-Butler.

Midge was very grateful to be a “House-Mom”. She was asked one time. “Do you work?”
her response was “No, I just stay home and take care of my kids.” Midge took pride in
taking care of her children, keeping her house clean and preparing meals. Her home
with the central location for all family member during holidays and gatherings.

Ethel was predeceased by father Robert Butler, mother Margret Butler, brothers Robert
Butler, Roger Butler, Donald Butler, Lewis Butler, George Butler, and sister Elaine
Butler. She is survived by brother John Butler and sisters Ruth Reeves and Esther
Adams. She also has 17 grandchildren and 55 great grandchildren and a host of nieces
and nephews. As well, a host of friends and extended family.