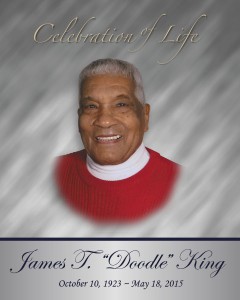 James T. “Doodle” King , 91, of Anderson passed away on May 18, 2015,at Manor Care Rehabilitation Center  following an extended illness.

He was born  October 10, 1923 in Indianapolis, Indiana  to James P. King  and Ethel Eldridge . He was raised by his Grandparents, Eliza and Harry King, in Lebanon, Indiana

James graduated from Lebanon Senior High School in  1942 .  September 1, 1946, he married the love of his life, Georganna Raymore. They celebrated their 67th  Wedding Anniversary this past year.  From this union they became the proud parents of three children.

He was employed at Firestone Rubber Company of Noblesville, Indiana, where he  retired as a company supervisor after 36 years of outstanding employment. He was also employed at Sherman Fur Company, Westside Community Center, City Engineer Department, and was Purchasing Agent for the State of Indiana.

After making Anderson his home, he became a member of New Hope United Methodist Church. He later joined Sherman Street Church of God, his place of worship until his health declined.   Those attending Sherman Street would be welcomed by James as the “Greeter” with a warm smile.

James was an active member of the Madison County Republican Party of which he served for 49 years.  In 1950, he became a Ward Chairman and Precinct Committeeman. He was appointed by Governor Robert Orr to serve on his Personal Advisory Committee,  President Reagan’s Task Force,  Delegate to the State Republican Convention, 1980  Delegate to the National Republican Convention , and  Member of the Madison County Lincoln Club. Among his awards and accolades were:  1980 National Black Republican Chairman of the Year, the Sagamore of the Wabash ( the highest State of Indiana Governor’s  award) and Lincoln Club President Award.

He belonged to the Cavalier men’s social club, member of the Madison County Urban League and NAACP.

James was a sports enthusiast. He was a participant, a coach and a spectator.  He coached Little League Baseball, served as Director of Westside Community Center, and a loyal fan of the Indiana University Basketball Team,  a  die-hard Pacers and Colts fan, and an Anderson High School Basketball season ticket holder.

He was preceded in death by his parents and grandparents.

*Visitation will be two hour prior to service.*

The service will also be available via live stream at http://Glazebrooksfs.com .

Interment will be at Anderson Memorial Park.