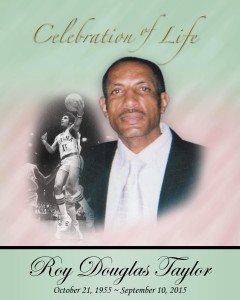 Roy was an avid sports fan and a star basketball player.  He was named Mr. Basketball in 1974. Not only was he an inspiration to his younger brothers, who went on to play basketball as well, he touched the lives of many in the Anderson community.  As a proud leader of the Anderson Indians Basketball team, it was a given that #43 always led to a packed house at the Wigwam.  His legendary jersey was retired in February 2014.

He graduated from Anderson High School in 1974.  He received an Associate Degree from Vincennes University.  He also later attended Murray State University.

He was joined in holy matrimony to Lenora Hampton on June 29, 2012.

He was preceded in death by his parents and a brother, Donald R. Taylor.