In Loving Memory of Trudi Smith 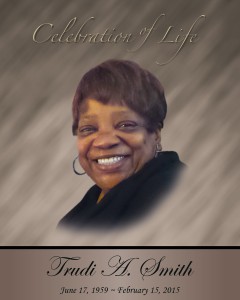 Trudi was born June 17, 1959 in Brooklyn, NY.  She attended Anderson Community Schools. She was employed in healthcare as a CAN/QMA until failing health. She was a member of Second Missionary Baptist Church.