In Memory of Bobbi L. Brown 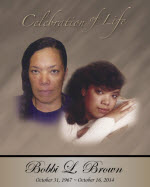 She was born Oct. 31, 1967 in Anderson, Ind. to Robert J. and the late Connie M. Brown.  She was a graduate of Madison Heights and a homemaker who loved her family.

Proceeded in death by her mother, Connie M. (Owens) Brown.