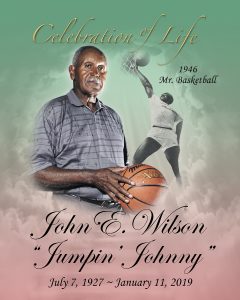 The basketball legend resided in Chester, VA where he moved two years ago to live with his son John E. Wilson Jr. He enjoyed life’s simplicities there – spending quality time with his grandchildren and great-grandchildren and walking the family dog Drake.

Considered one of Anderson’s best athletes, Johnny was born July 7, 1927 in Anderson to modest beginnings. He excelled in sports at an early age. He and his brothers practiced basketball using an old sock filled with rags and a rock as the ball and shooting it into a bushel basket nailed to shed. By 5th grade, he had led his Shadeland Elementary team to a championship. It was the emergence of such talent that would propel a career of more than 60 years.

A four-sport star at Anderson High School – track, baseball, football and basketball – Johnny stood about 6 feet and was the only player on his basketball team who could dunk the ball. The fete earned him the nickname “Jumping Johnny.”

His talent helped carry AHS to the 1946 state basketball championship – the last one for the school – and earned him the title Indiana Mr. Basketball. While he had hopes to attend Indiana University, racial discrimination denied him that opportunity. Disappointed but not detoured, he instead stayed home and attended Anderson College.

He was a standout at AC, earning 11 letters in four sports. He was selected the basketball team’s most valuable player for three seasons, voted All-Hoosier Conference and was a two- time All-American during which time he was the team’s leading scorer and third leading scorer in the nation. Similarly, he was named most valuable player and all conference in baseball and track.
Johnny left the school after three years to start his professional career but again, racial barriers limited his options. Neither Major League Baseball nor the National Basketball Association drafted black players – despite their talent. He instead signed on with the Negro Baseball League’s Chicago American Giants. However, he earned national and international acclaim playing basketball with the Harlem Globetrotters. He spent six years with the team traveling the world and honing his specialty of drop kicking the basketball through the hoop. For two of those years, he played part-time while serving in the U.S. Army during the Korean War.

He eventually returned to Anderson College and earned a bachelor’s degree in education. He landed a job teaching at an Indianapolis elementary school. Several years later he was hired to teach history and coach basketball at the city’s Wood High School, where he became the first black head coach of an integrated school in the state. He received a master’s degree in physical education from Indiana State University. For 16 years, he was head coach and athletic director at Malcolm X College in Chicago.

Though mostly quiet and introspective, Johnny’s impact on his players and colleagues were loud and clear. He recruited college players who may have never had chance at earning a degree. When they didn’t have money for food, he fed them and allowed them to stay in his home.

Johnny’s generosity was never boastful. His demeanor was often called “gentlemanly.” His popularity never waned. Through the years, it was common for Johnny to receive letters from fans seeking autographed photos. He always obliged – right up to the days before his passing.

His successes on and off the court earned him numerous awards. He was named a Sagamore of the Wabash by then Indiana Gov. Mike Pence, elected to the Indiana Basketball Hall of Fame, was among the first inductees to the Anderson University Athletic Hall of Fame, won a humanitarian award from Alpha Kappa Sorority, received distinguished service and citizen award from the Boys Scouts of America, was honored by the Masons, Anderson Black Expo and the City of Anderson. He also was chosen as a goodwill ambassador by the Harlem Globetrotters and was recently recognized by the team as their oldest living star. Anderson University awarded him an honorary doctorate.

Johnny’s Midwestern upbringing afforded him simple pleasures. He loved his mother’s apple pie – she always had one waiting whenever he could get home for a visit. He loved to golf and was on the links only a few months before his death. He also enjoyed the outdoors frequently taking fishing trips with his brother Gene and friends.

Twice Johnny had opportunity to coach with one of his all-time favorite people – his son John Jr. They shared the bench when the younger John became his assistant coach at Malcolm X and later switched roles when Johnny became his son’s assistant coach at Lockhaven University in Pennsylvania. In addition to coaching, Johnny continued to impart his wisdom on students during his nine years at Lockhaven by giving the convocation address that started the school year.

His love for his hometown eventually brought him back to Anderson where he renewed his membership at Allen Chapel African Methodist Episcopal Church – where his grandmother Mary Rhoades was a founding member. He also was assistant coach at his alma maters Anderson High School and Anderson University. Giving back to the community where he was raised was a priority for Johnny. He volunteered at Allen Chapel’s weekly clothing giveaway, donated turkeys at Thanksgiving, and visited prison inmates.

For his accomplishments, the city of Anderson erected a 9-foot bronze statue in his honor on the campus of Anderson High School. Johnny graciously accepted the honor with same humility and inspiration he had exhibited throughout his life.