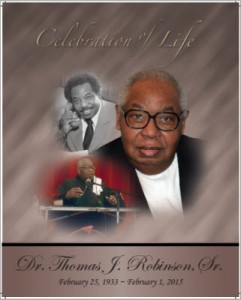 The bible says, “To His beloved He gives the Gift of Sleep” (Psalms 127:2). Dr. Thomas J. Robinson, Sr. the devoted pastor of Mt. Pilgrim Church, Inc. accepted his gift of sleep and transitioned from earth to heaven on Sunday morning February 1, 2015. Pastor Robinson was born to Tom and Mary Q. Robinson on February 25, 1933 in Scott, MS. He came from a family of 10 that now has two remaining siblings (R.C. Robinson, Augusta, GA and Leo Wahid Shakir, Ford Heights, IL).
Dr. Robinson’s was a life-long advocate of learning. Completing high school by the age of 12, Robinson continued his education at Wiley College in Marshall, TX majoring in Business. After graduating from Wiley College, he continued to complete graduate level studies at International Seminary (Plymouth, FL) and Simmons Bible College (Louisville, KY). Dr. Robinson eventually became the Dean of the Indiana Extension of Simmons Bible College.

Robinson’s accepted God’s call to the Gospel Ministry 40 years ago and preached his initial sermon January 1975. His love for people and strong leadership skills were evident and within six months he was called to be the second Pastor of Mt. Pilgrim Missionary Baptist Church succeeding the founder, Pastor Henry Turner.

Dr. Robinson was a man of wisdom and integrity with a keen business acumen. He is most noted for his creative approach to business, ministry and community action/social justice impact. He became the Executive Director and Founder of the Anderson Opportunities Industrialization Center (OIC) where the vision was to “help those who were considered to be helpless” gain employment. He was also instrumental in developing and organizing the “Annual Racial Reconciliation Picnic” that is held in the Jackson Park Community of Anderson, IN where over 3000 multicultural/multiethnic diverse people come together to fellowship.

Dr. Robinson leaves behind his beloved wife of 19 years, Eva D. Robinson. He also leaves a dynamic legacy of three preaching sons, Dr. Darren T. (Connie) Robinson, Dr. Sylvester (Cynthia) Robinson and Pastor Thomas J. (Teresa) Robinson, Jr. all who have followed their father into ministry/pastoring. He has five daughters, Donna Dennis (Deceased), Naala (Solomon) Cross, Mary Ann Cleveland (Deceased), Shawna Wallace and Sharene (Derrick) Weaver. Robinson will be remembered for years to come by a host of 14 grandchildren, 17 great grandchildren, nieces, nephews, cousins, friends, community members and an adoring church family. His impact in his family, church and in Anderson, IN will be truly missed.

(Visitation one hour prior to service)