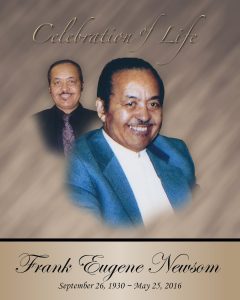 Frank Eugene Newsom, 85, departed this life on May 25, 2016, at his residence with his family and circle of friends at his bedside. He is now at peace with our Lord and Savior, Jesus, the Christ.

He was born on September 26, 1930, in Anderson, Indiana to Waymon and Luella (Holt) Newsom. Following the death of his Mother, he was reared by his Aunt Dixie and Uncle James Douglas.

Frank attended Anderson Public Schools and enlisted in the United States Army on November 2,1948, and was honorably discharged on Nov. 1, 1951 at  the rank of Staff Sgt. He received his basic training at Ft. Dix, NJ and was assigned to the Anti-Aircraft Division.  During the Korean Conflict, he and his two brothers, George and Bill, were miraculously all stationed in Japan and served in the same division where Frank was Communication Chief and supervised his older brothers. He continued his education and in 1963 he completed the prescribed courses of study in Television-Electronics Servicing from the Commercial Trades Institute of Chicago. He owned and operated “Frank’s Television Repair Shop” for many years .He then continued his education at Texas A&M and Ohio State University and was employed by the United States Department of Agriculture as a Federal Food inspector.  He was appointed a member of the Equal Employment Opportunity Commission of the State of IN.   Frank retired from his federal employment after 45 years of service.

On November 28, 1954, he married “the Love of his Life”, Mary Jane Weatherly. The two of them, in true harmony, created a bond that could not be broken.  Mary attended to all of Frank’s needs and could not have been a more devoted wife and mother as she catered to his needs.

He was a member of Sherman Street Church of God. When he was unable to attend, Frank greatly enjoyed visits from the ministers and members of Sherman Street. Receiving Holy Communion, praying, Bible study and many discussions were uplifting to him. He was constantly “into the word”. He was an avid Bible reader and read from Genesis to Revelations many times.

Frank was an award winning golfer and in his younger days, he was an amateur boxer and highly skilled swimmer. He was a lifeguard at the Westside Community Center. Additionally he was known to have rescued a swimmer in peril. He also enjoyed fishing, hunting and bowling. Frank was always ready to challenge anyone to a game of chess. He was active in social and civic endeavors. He was a mentor to many youth as was demonstrated by his being a Boy Scout Leader for Troop #57.

Services will be held at noon on Wednesday, June 1st at Sherman Street Church of God, 1925 Sherman St., Anderson, Ind. The Rev. Ragen  B. Mitchell will officiate. Interment will take place in East Maplewood Cemetery.

Visitation will be Tuesday from 6 to 8 PM and Wednesday 10 to 12 AM, prior to the service at the Church.

Services can be viewed live stream at www.glazebrooksfs.com

*The Rev. Ragen  B. Mitchell will officiate *

The service will also be available via live stream at http://Glazebrooksfs.com .

Interment will be at Maplewood Cemetary.