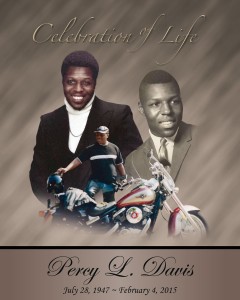 Percy was born in Mobile, Ala. on July 28, 1947 to the late Tempie L. and Samuel Davis, Sr. He graduated from Anderson High School in 1966 and was a veteran of the United States Army.  He was employed at General Motors 43.5 years.

Percy was affectionately called “Redbone” because of his red truck and red Chevy, Monte Carlo. He loved sports, and was an outstanding athlete. He enjoyed coaching sports in the youth summer programs and softball leagues.

He was preceded in death by his parents and brother Horace L. Davis.