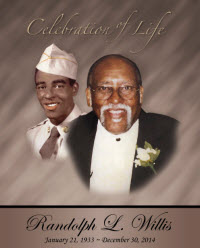 Randolph L. Willis transitioned from this earth to embrace the arms of his Lord and Savior, while surrounded by his loving family, on December 30, 2014 after an extended illness.

He was born on January 21, 1933 to Marshall and Patsy D. Willis in Anderson, Indiana.  Randolph was committed and proud of the Anderson community, as he lived his entire life and raised his family in the city he loved.

Randolph was a believer and follower of Christ.  He confessed his faith at the age of twelve at Second Baptist Church where he remained a faithful and devoted member for seventy years.  Randolph was a Deacon at Second Baptist for thirty-five years, where he served as Chairman of the Deacon Board until illness limited his participation.  Deacon Randolph Willis was the epitome of a servant leader,  whereby he also served as an Usher, Usher Board President, member of the Adult Choir, contractor/foreman for several church renovation projects, and would often serve the ministry by providing transportation for others members.  Deacon Willis’ greatest joy was his faith in our Lord and Savior Jesus the Christ and his family.

Randolph served honorably in the United States Army and was a veteran of the Korean War.  He was a member of the American Legion and Local UAW 662.  He worked dutifully at General Motors Delco Remy for forty-three years until he retired.  He was a hard-working and dedicated employee, to many he was known as “Mr. Fix-It-Man;” if you called him, he would come.

Randolph Willis was affectionately known as “Uncle Ranny” to his nieces, nephews, and the surrounding neighborhood and community which he loved and accepted.  To many he was the “adopted” father, brother, and role model that provided and guided them with strong advice and encouragement.

He was preceded in death by his parents Marshall and Patsy Willis; his sisters Roberta Goodwin and Charlotte Taylor; and his brother Robert Willis.

The family of Deacon Randolph L. Willis would like to express our sincere gratitude to everyone for all acts of kindness. A special thank you to Pastor William L. O’Neal and the Second Baptist Church Family, Dr. John Woodall, Dr. Hazim Rimawi, Dr. Rod Nisi, The Saint Vincent Hospice Staff, and a special thanks to Elaine Taylor.