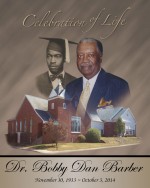 Tennessee. He later went on to receive his Bachelor’s of Science Degree at Tennessee State

University. Tennessee State also ushered him into the membership of the Mighty Rho Psi Chapter

of Omega Psi Phi Fraternity, Inc. He continued his education at the Tuskegee University School of

While at Tuskegee, he met his wonderful wife, Matilda (Jernigan) Barber, whom he later married on

December 27, 1959. Three children were born from this union.

Dr. Barber was employed by the United States Department of Agriculture; originally assigned to

Milwaukee, Wisconsin in 1960, he later moved his family to Anderson, Indiana in 1964. Meticulous and

professional, Dr. Barber was recognized for many contributions in this field, notably, as Chief Officer

for Disease Eradication, which included the war against Hog Cholera in 1976. He traveled extensively

around the world on behalf of the USDA as investigator for foreign animal disease to Brazil, China,

Finland, and England. In 1987, he served as the lead veterinarian for the Equestrian events for the Pan-

Am Games held in Indianapolis, Indiana. In 1994, the USDA Civil Rights Program of the Animal and

Plant Health Inspection Service awarded him a Certificate of Appreciation for his years of service.

Dr. Barber was a faithful member of Allen Chapel A.M.E. Church in Anderson, Indiana, since 1964,

where he served on the Trustee Board, Sons of Allen, Lay Organization, and the choir. He annually

traveled to Phoenix, Arizona where he became a visiting member of Tanner Chapel A.M.E. Church. The

Tanner Chapel family was also entreated with his faithfulness to the various church organizations, the

weekly Tuesday Bible Study, and of course, the choir.

He enjoyed traveling and spending time with his family, and he was an avid golfer. Golfing was a

favorite pastime of his, and many friends were made who shared his love of the sport. He traveled all

over the world sampling the many courses that were available, and his love of golf culminated with the

trip of a lifetime to Scotland, the country of origin for the sport. Dr. Barber exhibited his golf mastery at

the Old Course at St. Andrews.

On October 3, 2014, Dr. Bobby Dan Barber went home to be with his Lord after a sudden illness.

Bobby was preceded in death by his parents, Juanita Barber and Thomas Barber and one older brother,

Elwood Barber. He leaves to cherish his memory: his loving wife of 54 years, Matilda Barber of

(Sarah Ann) of East Point, Georgia, and a host of nieces, nephews, cousins, and family friends. 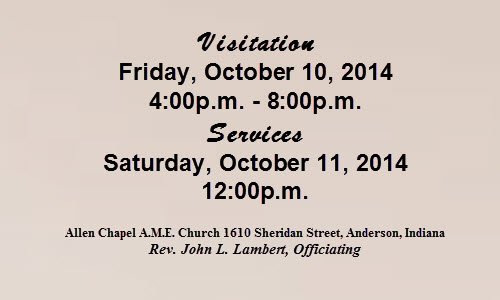