In Memory of Gabe Patterson 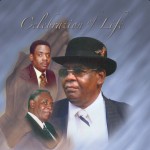 The Homegoing Celebration of Deacon Gabe Patterson May 24, 2014 at 11:00am, Christ Temple Apostolic Church in Anderson, Indiana.

On August 16, 1948, a son was born to three great parents Jack and Ada Patterson, and God being the third parent. God, having the power to give life and to take it away, chose to take back his son. He is a God who never makes mistakes. After 65 years including several years of illness, God said my son it’s time to take your rest. Gabe Patterson was born on August 16, 1948 in Montgomery Alabama to Jack and Ada Patterson. He worked on a family cattle farm for many years. He graduated from Dunbar High School in Ramer, Alabama in 1968. During his senior year, he was also the school bus driver. Growing up he attended Jericho AME Church in Montgomery, Alabama. After 19 years of life in his home state of Alabama, he relocated to Anderson Indiana. One of the first things he did after moving to Anderson was attend church at Christ Temple where he became a born again Christian. His membership remained here until his death. Gabe enjoyed singing with the Indiana State Young People’s Choir and was a loyal Sunday School Bus Driver for many years. He enjoyed spending time with his family and friends. He served as a faithful Deacon and member of the Christ Temple Morning Choir as well as the Seven Seals Men’s Chorus. He was employed at Firestone Rubber Company in Noblesville, IN for over 23 years. On June 2, 1973, he was joined in marriage to Ola Mae Neal by their late pastor District Elder Armster Barnes. He leaves to cherish his memory his mother, Ada Patterson, his wife, Ola Patterson; three children Mike Green of Anderson, IN, Renita Patterson of Chapel Hill, NC, Chris (Sarah) Patterson of Anderson, IN; seven sisters Callie Lampley of  Anderson, IN, Georgia (Eddie) Arrington of Montgomery, AL, Arline (R.C.) Fairer of Anderson, IN, Katie (Charlie) Washington of Montgomery, AL, Mary (Henry) Hall of Montgomery, AL, Johnsie Harris of Montgomery, AL, Ada (Thommie) Scott of Montgomery, AL; one brother Billie (Virginia) Patterson of Montgomery, AL; three grandchildren Julian Alfaro, Vanessa Alfaro, Johnathan Patterson; two great grandchildren, three aunts, one uncle, and a great host of nieces, nephews, cousins, saints, and friends. He was preceded in death by his father Jack Patterson Sr, one sister Etoshia German, and three brothers Joe Patterson, Jack Patterson Jr. and Herbert Patterson.

Acknowledgements
Special thanks to his nephew and niece Frank and Deloris Peoples.

The family wishes to thank everyone for their acknowledgements, support and
prayers.